The blockchain network of Tron (TRX) has hit all-time highs in several metrics.

Tron’s all-time highs in terms of daily active users and daily transaction count have been visualized through the following two charts, courtesy of Tronscan.org.

Another Tron metric to hit all-time-high value is the network’s unique address count. According to Tronscan.org, the network now hosts over 38.58 million unique addresses as visualized in the following chart courtesy of the tracking website.

With respect to price action, Tron (TRX) is currently trading at $0.068 with the 200-day moving average (green) providing the last line of defense before entering into bear territory as demonstrated in the chart below. 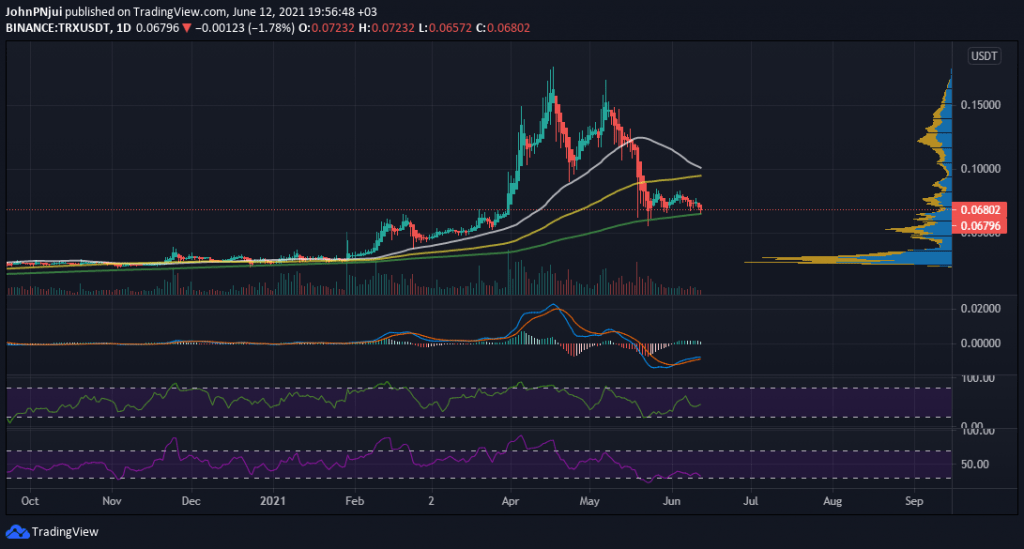 Also from the chart, it can be observed that Tron (TRX) printed a double-top pattern between the months of April and May when the crypto markets were in bullish territory. Tron has since suffered a pullback to the local of $0.05563 set in late May as the crypto-verse digested the following three news events.

At the time of writing, Tron is exhibiting some weakness as demonstrated by a reduction in daily trade volume and the daily MACD failing to break past the baseline. This weakness could result in Tron losing the 200-day MA as support, thus leading to a bear trend. Furthermore, caution is advised when trading Tron (TRX) as Bitcoin continues to consolidate between the $30k and $40k price areas.