Litecoin Market Attempts Downsizing – October13
There has been a sign that the LTC/USD market attempts downsizing around the level of $170. As of writing, the crypto coin is trading around $169 at a minimal negative percentage rate of about 1.95. That gives an insight that the market may likely witness a degree of downs in the near time.

LTC/USD – Daily Chart
The LTC/USD daily chart reveals that the crypto market attempts downsizing around the level at $170. The 14-day SMA trend line and the 50-day SMA trend line have conjoined around the current trading zone as the bullish trend line drew in a supportive manner closely beneath them. The Stochastic Oscillators have crossed the lines northbound against the range line at 80. And that indicates the potential that a price depression motion may take place in the near time.

Could there be a fast return of an upward motion in the LTC/USD trading operations as the market attempts downsizing?

Considering the readings of the Stochastic Oscillators, it now appears that the LTC/USD trading operations presently may not witness a fast return of an upward motion as the market attempts to downsize its valuation. The current trading outlook may have to decline slightly in a succession order to let bulls rebuild their support baseline at a low trading zone close around the level of $150 or $140 in an extension. Investors are to hold on or even add to their investment.

On the downside, the LTC/USD market bears have now had the stage getting set to witness some falling forces beneath the market line of $200. A bigger-bearish candlestick needed to emerge against the SMAs at the conjoined trading zone to let the market have a definite downward direction. However, in the course of erratic volatility, the touching of price around lower lines may in no time cause the selling positions to get whipsawed. 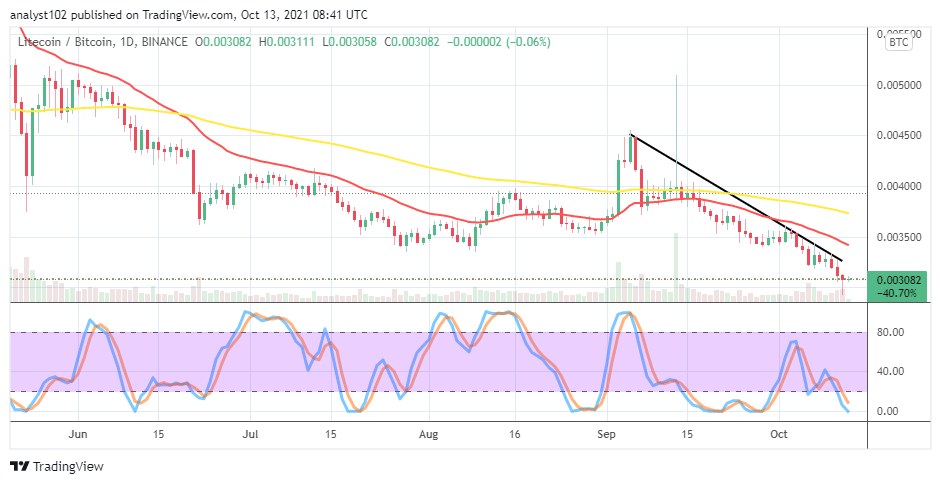 In comparison, the LTC/BTC price analysis chart shows that the base crypto is overwhelmed by the counter crypto. The 14-day SMA trend line bends southward underneath the 50-day SMA trend line a bit-far above the formation of bearish candlesticks. The Stochastic Oscillators have moved into the oversold region, touching the critical level at zero. That portends the probability that the base crypto may soon be regaining momentum against the trending capability of the flagship counter instrument.