The cryptocurrency market is having a strong end to the week. Its total value has risen by nearly 4% in the past 24 hours, to $1.73 trillion. Ethereum is largely responsible for this upswing, with its much-awaited London upgrade successfully taking place yesterday. It has led increases across the board, with pretty much every cryptocurrency enjoying modest-to-strong gains in the past day. Accordingly, we’ve picked our 5 best cryptocurrency to buy for the weekend rally. This covers coins likely to continue rising over Saturday and Sunday. However, some of these also have good long-term potential.

5 Best Cryptocurrency To Buy For The Weekend Rally

Ethereum is now only 36% down from its all-time high of $4,356, having been as low as $1,700 as recently as July 20. In other words, it’s making up lost ground fast. And there’s every reason to believe it will continue rising not only this weekend, but in the weeks ahead.

This is mostly because of the London hard fork, which miners activated yesterday. It introduces a number of upgrades which make it more viable as a platform and an investment vehicle. In particular, EIP 1559 has resulted in Ethereum burning a portion of its transaction fees in every block, with some arguing that the cryptocurrency is now deflationary as a result.

Either way, the future is looking increasingly bright for Ethereum. With the London fork now out of the way, it can now focus on its transition to Ethereum 2.0 and proof-of-stake. Given that the latter will rely on staking, we can expect an increasing amount of ETH to be taken out of circulation. We can also expect the market to begin increasingly pricing in this change over the coming weeks, pushing ETH further upwards.

Ethereum has overshadowed bitcoin (BTC) this week. However, it has been one of the biggest beneficiaries of the Ethereum rally in the past 24 hours. And if the market is going to rally over the weekend, we can nearly be certain that BTC will really along with it. It’s up by 5% in the past 24 hours, to $40,800. It’s also up by 26% in the past fortnight and by 20% in the past month. 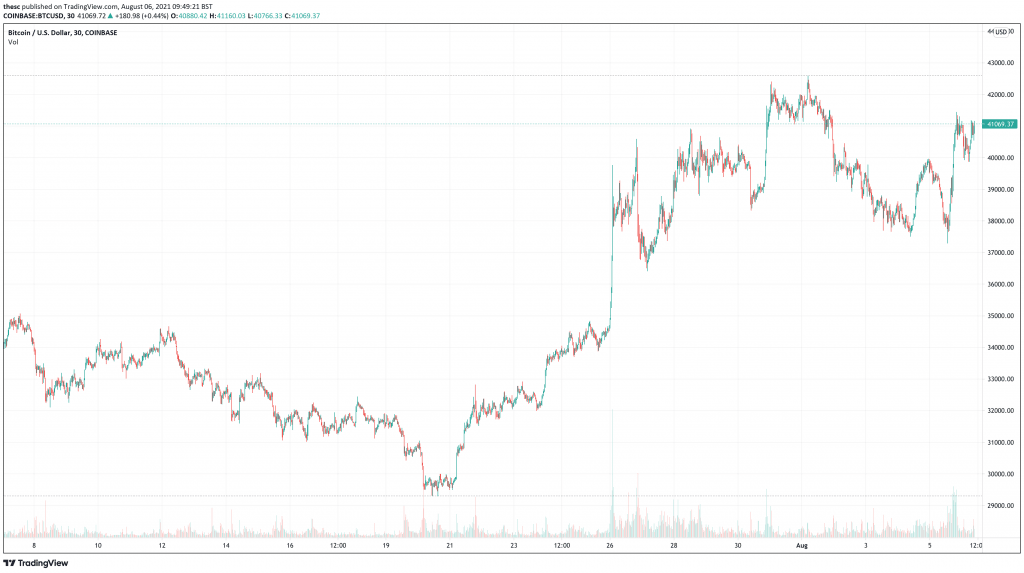 Prior to the good Ethereum news, bitcoin has had a rocky week. The United States Congress is in the process of debating an infrastructure bill that could impose very stringent KYC checks on the entire ecosystem. News of this bill depressed bitcoin’s price from Sunday onwards, which fell from $42,600 to around $37,700. Remarks from Gary Gensler also contributed to this drop, with the SEC Chairman suggesting that crypto should be regulated more strictly.

However, given that bitcoin’s fundamentals are unchanged, this fall prepares the ground for a rebound. We’re already seeing this bounce in progress, but it’s likely to continue over the weekend. Aside from Ethereum’s fork, bitcoin’s reputation has also benefitted from a high profile article in British newspaper the Observer. It reported on how the use of bitcoin is taking off in Nigeria, within a context of governmental authoritarianism. Despite framing bitcoin as a “problem” for the Nigerian government, it described how it has become a lifeline for many people.

This, if nothing else, underlines that Bitcoin has a real use case and does confer genuine financial freedom on many people. And it’s why BTC remains one of our 5 best cryptocurrency to buy for the weekend rally.

One mini-event within this week’s rally missed by many observers was uniswap (UNI) overtaking Binance USD (BUSD) to become the tenth biggest coin by market cap, once again. At $25, it’s nearly 9% up over the past 24 hours and 28% up over the past week. It’s also 42% up over the last 14 days and 12% up across this past month. 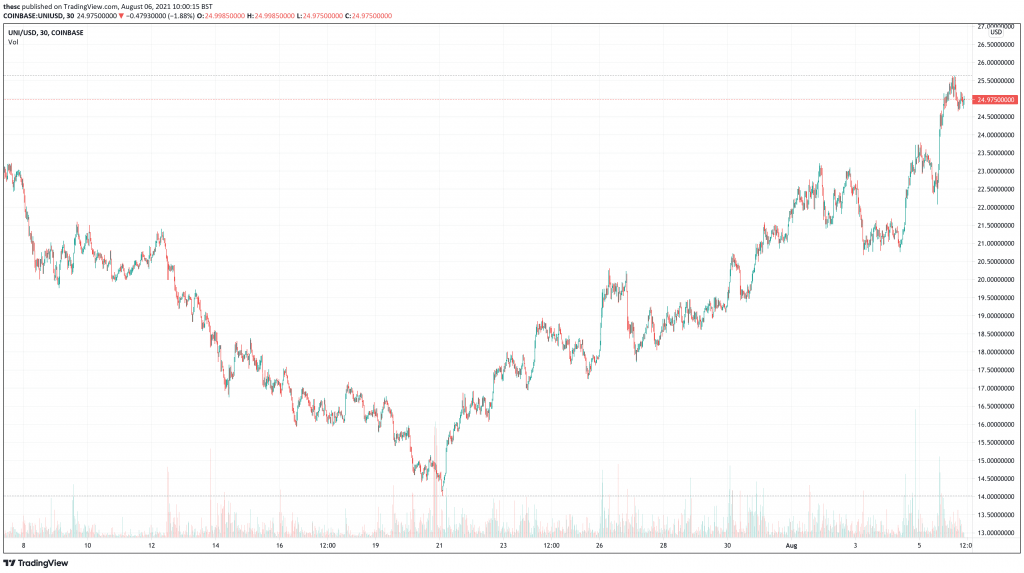 Ethereum doing well is very good news for Uniswap, which is an Ethereum-based decentralised exchange (DEX). On the one hand, Ethereum improving its capacity and capabilities will make Uniswap more viable as a DEX. But as an exchange that deals primarily in ERC-20 tokens, it will also enjoy increases demand and volume if there’s increased demand for ETH and other ERC coins.

More broadly, Uniswap is likely to benefit in the coming weeks due to regulatory issues. Much of the cryptocurrency community panicked this past week when the aforementioned infrastructure bill proposed expanding the definition of “broker” to pretty much every entity that transfers cryptocurrency, including DEXes. However, a redraft of the bill excluded explicit mention of decentralised exchanges, meaning they won’t be subject to strict KYC regulations.

1/ We didn’t get the language we wanted in the final bill text. It’s better than where it started, but still not good enough to clearly exclude miners and similarly situated persons.

Here’s how it started and the final with the changes we were able to get. pic.twitter.com/Y0LSUf7UEY

Put differently, DEXes such as Uniswap are going to be escaping with very little regulation. At the same tie, many other platforms will have to conduct pretty heavy-going KYC measures, while also reporting on transfers to the IRS.

This means that, in a weird kind of way, it’s been a good week for Uniswap. 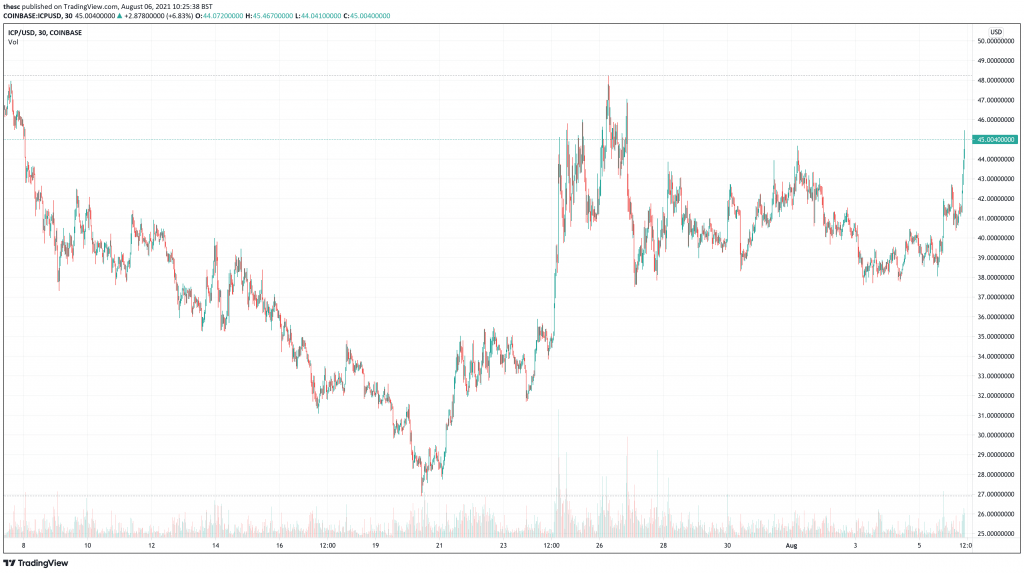 Given that ICP is still 93% down from its ATH, it’s arguably in one of the best positions in the market to jump strongly. Its recent rises bear this out, and it could very well continue into the weekend and beyond.

Interestingly, Dfinity (its development team) recently came out with some growth metrics. They show that Internet Computer attracted 500 developers and 250,000 users with 10 weeks of its launch. If this growth continues, Dfinity notes, it could become the biggest blockchain platform by the end of 2020.

“Our estimate is that the Internet Computer will have significantly greater DAU than the rest of blockchain by the end of year,” Dominic Williams tells Bloomberg. https://t.co/84QyhqBLKD pic.twitter.com/bLsCl5lOva

Ethereum classic (ETC) hasn’t obviously received as much attention as Ethereum this week. Nonetheless, it’s up 4% in the past 24 hours and by 5% in the past week. On top of this, it’s up by 19% in the past fortnight, as well as 600% up over the last 12 months. 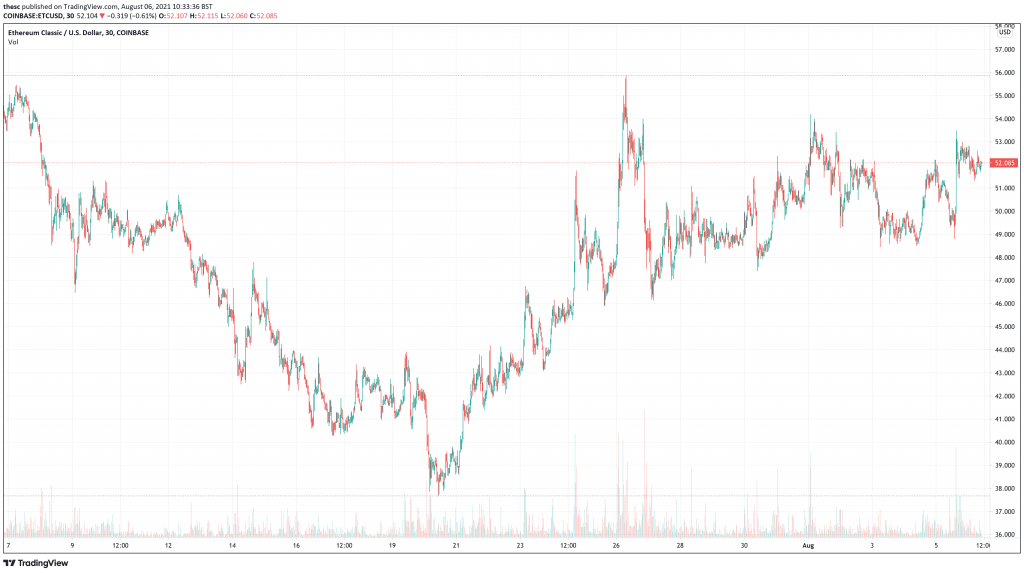 ETC is another coin that will benefit from Ethereum’s successful march towards proof-of-stake. When Ethereum does finally merge with the Ethereum 2.0 beacon chain, it’s expected that Ethereum miners will migrate to Classic.

Probably so. Time to load up on $ETC before the miners migrate and price goes boom.#EthereumClassic #ETCARMY

If this is true, the extra of influx of miners will make the Ethereum Classic much more secure (ETC has been dogged by 51% attacks in the past). At the same time, Ethereum Classic itself is taking development steps to improve its security and stability on its own account. This is evident in the recent Magneto upgrade, which introduced a number of transaction improvements and enhancements in how gas is used, thereby making it more secure.

Binance has successfully implemented the recent #EthereumClassic Magneto network upgrade. Though deposits/withdrawals were paused the trading of ETC was not affected during the upgrade.

Thanks for the ongoing support @binance @cz_binance!
https://t.co/EEkUtia09p

As such, there are plenty of reasons to be quietly confident in ETC. That’s why it’s one of our 5 best cryptocurrency buy for the weekend rally.

PrevPreviousSolana Price Up 7.2% to $39.57- Where to Buy SOL
Next5 Top Cryptocurrency To Buy For Long Term Returns August 2021 Week 1Next